PLEASE BE ADVISED: Visitors should check our homepage regarding closure announcements due to extreme, inclement weather events (such as high-winds, subfreezing temperatures, snow, etc.). Please be sure to check our homepage before visiting. Closures will also be posted to our social media; follow @pacificbonsaimuseum on Instagram and Facebook for up-to-date information.

Admission is by donation. The suggested donation amount is $10 per adult. Donations are accepted at the end of the exhibit. Thank you!

Here are a few things you can expect when you visit:

Also, see our new line of five, botanical print masks (including one bonsai print) available in our online shop.

We recommend using a GPS-enabled phone or other device to navigate to the Museum. You can use Google Maps for directions.

Please note: Occasionally, the gate at the West entry will be closed during times when the Museum is open. If this is the case, please proceed to the East entry. (See map below.)

Driving from the North

Driving from the South 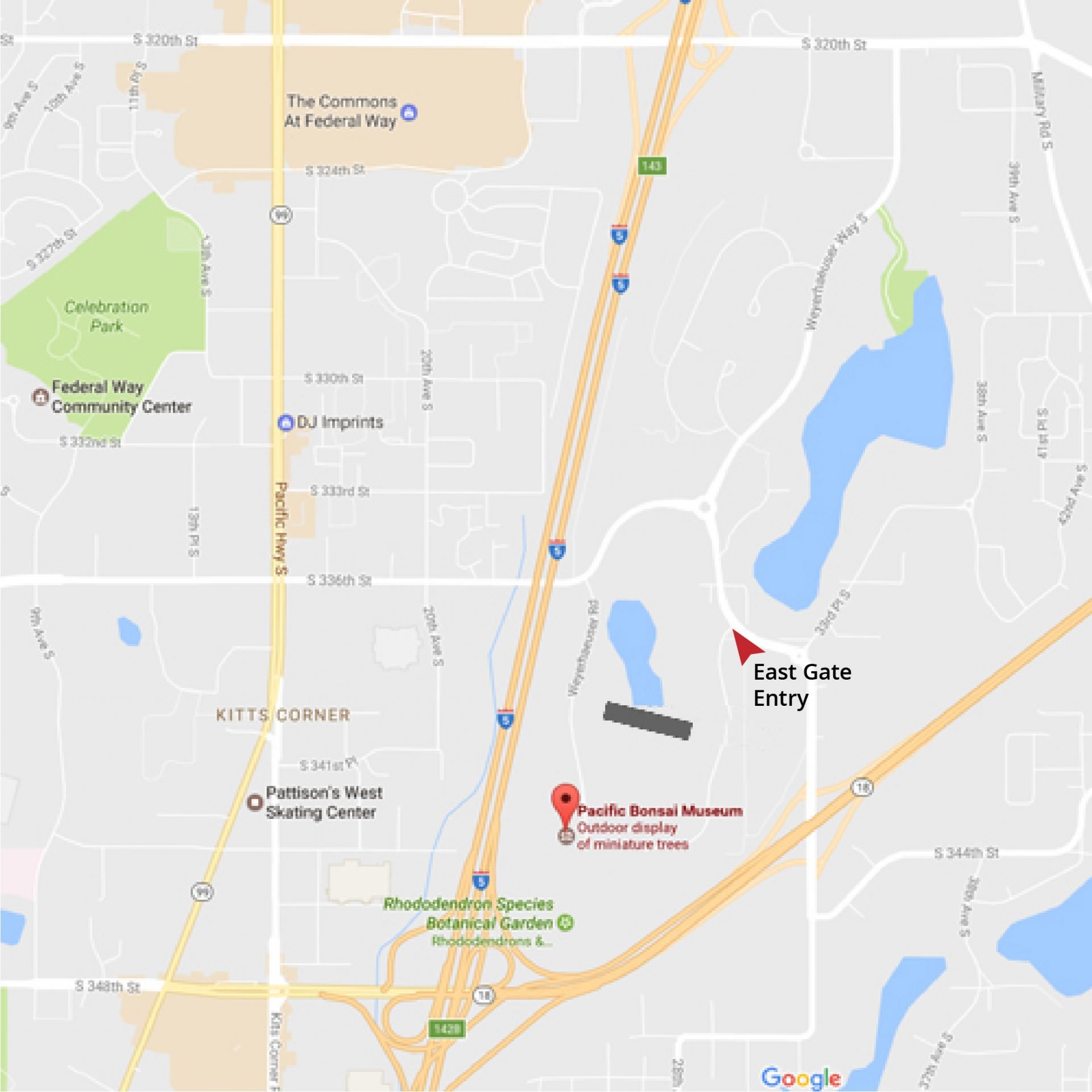 From the Seattle or Tacoma area, make your way to the Federal Way Transit Center. Depending on connections on your travel day, from the Transit Center either transfer to the 501 Bus to 20th St E, the 402 Bus to 336th & Pacific Hwy, or call a rideshare car. From SeaTac Airport, Sound Transit’s Link Light Rail to Tukwila Station connecting to a bus to Federal Way may be a better option for you.  Use Sound Transit’s Trip Planner to find your best route: https://www.soundtransit.org/. 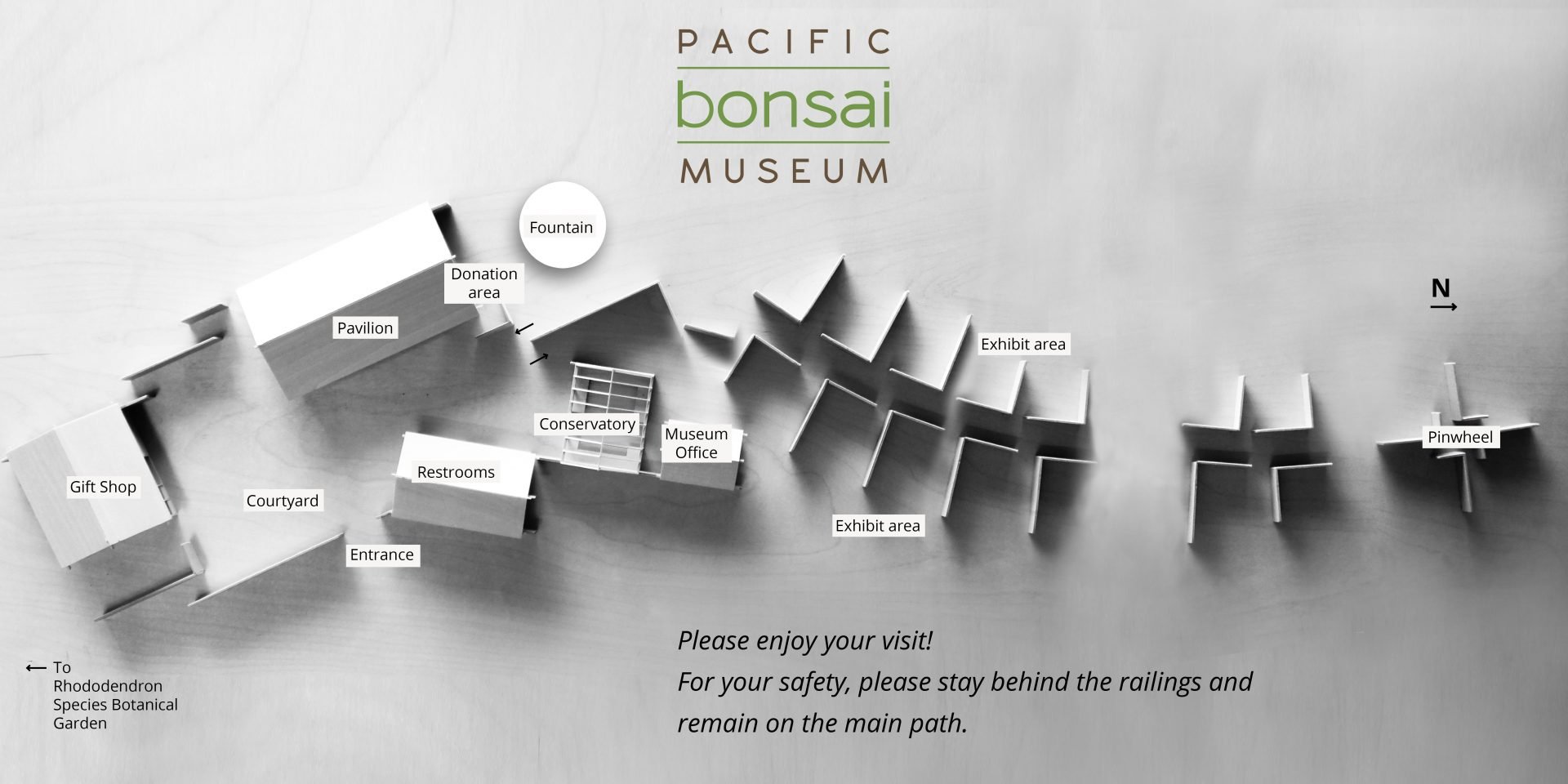 How much does it cost to visit Pacific Bonsai Museum?
We are happy to offer access to ALL with admission by donation. There is a donation station at the end of the exhibit area for visitors who are able to make a contribution towards the care of the collection.

What do the dates on the bonsai signs mean?
When you view our exhibit, you will notice two dates on our tree signs: ‘Date of Origin’ and ‘In training since.’ The Date of Origin is an estimate, based on known information from the original artist or collector, of the birth date of that tree, i.e. when it started growing from seed. The In training since date is the year that the tree was first put into a container and began being cultivated as a bonsai.

Which is the oldest tree in the collection?
The bonsai in our collection with the oldest estimated Date of Origin is a Korean Yew (Taxus cuspidata) that has an estimated birth year of 1500 and has been a bonsai since 1986. The bonsai in our collection with the oldest In training since date is the Museum’s signature “Domoto Maple,” named after the Japanese American nurseryman, Kanetaro Domoto, who cared for the tree after it was imported as a bonsai to America from Japan in 1913. Preliminary research indicates that the Domoto Maple is one of the oldest bonsai in America.

Where can I buy a bonsai tree?
Locally, we suggest Bonsai Northwest or Asia Pacific Gardening. If you are out of the local area, check with your local bonsai club to find out which sources other practitioners recommend.

Do you offer classes?
We do offer a Bonsai Basics Class suitable for beginners. Check our Events Calendar to find out when those are offered.

Where do the bonsai in the collection come from?
A large part of our collection was amassed in 1989 (when the collection was founded by the Weyerhaeuser Company) by an Acquisition Team who selected bonsai to represent countries of the Pacific Rim. Over the years, bonsai of the highest caliber have been donated and accessioned into the Museum’s collection. A few bonsai have been commissioned for the collection and a few exceptional others have been purchased by the Museum with the help of generous donors.

Who takes care of the Bonsai? Do the original artists come and maintain their bonsai?
When bonsai are donated to or acquired by the Museum, they become, according to practiced tradition, works under the artistic direction of the Museum’s Curator. Tradition also dictates that the original artist’s vision is respected and carried forward unless there is a sound reason to change that direction, or the health of the tree demands it. Once they become part of the collection or are accepted on long-term loan, bonsai are cared for by the Museum Curators and garden staff.

How often do the garden staff water the trees?
In the summertime, when bonsai are thirstiest, they are regularly watered up to three times a day. At other times of year, it varies by tree species, by container size, and by microclimate in the Museum. The garden staff are closely monitoring for drying, as under- or over- watering is the biggest contributor to determining future tree health.

How often are trees rotated through the display? If I revisit at a later date, will I see different bonsai on view?
Depending on the focus of our annual exhibits, and/or various stages of trees development, or if a particular tree is flowering or doing something particularly interesting, some bonsai are taken on- or off-view for a period of time. The amount of time varies by tree. If you visit two or more times a year, such as in the spring and winter, it is highly likely you will see different bonsai on view.

Do the bonsai remain outside all year-round?
Yes, all the bonsai in our outdoor display area (i.e. all except the tropical species in our Conservatory) stay outside all year long, all day and night. In the winter, we erect enclosures around the trees (like mini-greenhouses) to protect them from extreme temperatures. If temperatures drop below 32 degrees F, we put a small heater in the enclosure and put a ‘front’ on it. During those rare times, the collection is off-view.

What kind of tree/plant is ‘bonsai-able’?
Any woody plant is a candidate for bonsai, though ones with smaller leaves/needles tend to be the most ‘convincing.’